This page attempts to document common problems with TF2 Classic, and their solutions.

Make sure you've completely followed the instructions listed at the Installation page before attempting to solve your problem here.

It does this for every unsigned application. To sign it would cost us somewhere around $800 per year, so we don't. On the SmartScreen pop-up, click "More info", then "Run anyways".

This happens on Windows 7. We do not and cannot support Windows 7, you must install the game manually.

This happens when the application was built with a version of glibc that's newer than what your distribution carries. Currently, we support Ubuntu 20.04 and any other distribution with glibc 2.31 or newer.

Why are there so many errors when I run TF2CDownloader?

Those are normal. The output is extremely verbose. The first thing TF2CDownloader does is check if the game file already exists for the purpose of verifying it. It usually doesn't exist, which causes it to produce a "Checksum error". Then, if any mirrors are failing, timing out, missing, or otherwise having issues, it'll produce an error when it attempts to contact them as well. These are not fatal errors, and are expected in its course of operation.

If you're not extracting into your sourcemods, your extraction directory is a large and cluttered folder, and you're sorting by the modified date, you likely won't find the folder it extracted easily. You should instead sort the folder alphabetically, and then scroll until you find the "tf2classic" folder, so you can move it to your sourcemods. Pressing F5 to refresh the folder's contents may also be useful.

I get an error when I try to extract the ZIP!

This error is known to occur when using Windows Explorer's built-in ZIP extractor. You're required to instead use third-party archivers (see below) to extract the game's files.

Tested and supported options include 7-Zip, PeaZip, and WinZip (not free). WinRAR will likely also work, however it is discouraged as it's been known to randomly botch extractions in the past, along with being proprietary.

This problem is due to older versions of libzip not supporting ZIP files compressed using LZMA, affecting numerous archive managers. The unzip command will not work.

On KDE Plasma-based distributions, you should open Ark, click on "Settings" from the toolbar, click "Configure Ark...", and in the "Plugins" section of the configuration window, uncheck "Libzip plugin". Apply your changes and re-attempt extraction. It should fall back to using the P7Zip backend, which will work fine.

Generically, you should install 7-Zip and extract through the CLI. On Ubuntu 22.04+ or Debian 12+, install the "7zip" package. On Arch Linux or Manjaro, install "7-zip" from the AUR. Then run:

And move the extracted "tf2classic" folder to your sourcemods.

My game suddenly freezes or crashes when joining a map, when it didn't before!

You most likely joined a malicious server. An easy fix is to empty the tf2classic\download folder inside your game's folder, or more specifically, to remove any heavy _particles.txt files that appeared in the tf2classic\download\maps folder. It might also download a bunch of .bsp files that all have the same size, delete those too. These malicious servers won't be able to do anything else to your game or your computer.

These malicious servers disguises themselves as real existing server. An easy way to find which one of these servers are malicious is to see if it matches with a lot of these criteria:

If you manage to join one of these servers without crashing, they'll also mess with your config file, which will cause you to take more than 50 minutes to join another server. An easy fix is to type host_timescale 1 into the console.

Considering these servers tends to change ports extremely often, simply right clicking and blacklisting the server won't work permanently. Instead, blacklist the IP address with the port set to :0 (e.g. 12.34.56.78:0). This'll block every port of the IP address, and will cause the server to not escape your blacklist.

You can also get a blacklist by downloading this file, and importing it via the "Blacklisted Servers" tab. It contains every known malicious servers as of the time you download the file.

My textures are missing/It says it "could not load library client"!

The game didn't get fully extracted. If you're using TF2CDownloader, you may not have allowed it to fully finish before moving the extracted folder or playing the game. The prompt must say "Setup is over. Press Enter to continue" before you're safe to play.

If you installed the game manually, you may need to re-extract with a different tool.

I can't connect to any servers and all of the text starts with #TF!

Make sure your folder structure is correct. Inside your sourcemods folder, there should be a tf2classic folder, which should contain a gameinfo.txt file. If this doesn't perfectly line up, you extracted it incorrectly. If you have a path that looks like sourcemods/tf2classic-2.0.3/tf2classic or if all of your files are dumped loosely in sourcemods, that will cause this to happen.

The launcher tells me that SDK2013 isn't installed, but it is!

This can happen if Source SDK Base 2013 Multiplayer is installed onto a separate drive from the Steam client. The correct drive will almost always be C:\. Any other drive letters are bound to cause issues. You can move it as shown below: 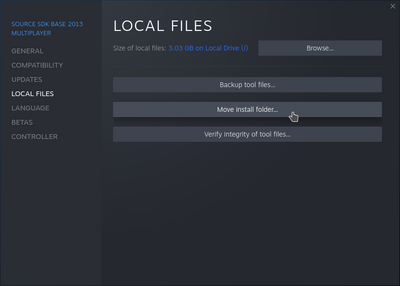 For advanced users, it's also possible to create a symlink from its expected location in the common folder on your C:\ drive to its real location on another drive. See instructions here for how to create one.

The launcher says that SDK2013 needs to be updated, but it is!

You should try to launch SDK2013 from Steam once. Even if Steam claims it's fully installed, it may still require validation or other work, which Steam will only perform when you try to run it. After launching and closing it again, restart the launcher.

If you run into any issues with the launcher, you're safe to ignore it entirely. The game should appear in your Steam library if it was installed correctly, and you can launch it through there instead.

My game doesn't appear in my Steam library!

If that doesn't work, make sure your folder structure is correct. Inside your sourcemods folder, there should be a tf2classic folder, which should contain a gameinfo.txt file. If this doesn't perfectly line up, you extracted it incorrectly. If you have a path that looks like sourcemods/tf2classic-2.0.3/tf2classic or if all of your files are dumped loosely in sourcemods, that will cause it to be undetectable.

This issue can also appear if Steam and TF2 Classic are installed on separate disks (for instance, Steam on your C: drive and TF2 Classic on your E: drive). The solution is to create a "symlink", a folder in your Steam installation that redirects to a folder on your external disk. The steps to do this vary depending on your system.

Creating a symlink on Windows

Replace "path to your sourcemods" with whatever path you require, for instance: "D:\Games\sourcemods"

Creating a symlink on Linux

Like you would Windows, exchange /path/to/your/sourcemods with the full path to the folder you wish to use on your external disk.

Note that any external disk used for running games must be readable and writable by your user, and you must have execute permissions. If this is an NTFS disk, follow Valve's guide on preparing it: https://github.com/ValveSoftware/Proton/wiki/Using-a-NTFS-disk-with-Linux-and-Windows.

On Linux, TF2C requires a special launch option to function properly. Right-click the game in your Steam library, click "Properties", then paste this into the Launch Options field:

This should fix the overlay, and allow you to connect to game servers.

"The server you are trying to connect to is running an older version of the game."

Players are invisible in my game!

This tends to happen if your network is unreliable or your game stutters. It's possible to run a command to fix this, though you'll need to run this command every time it happens.