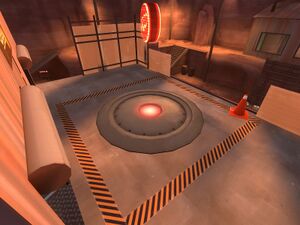 A Control point is a common objective found throughout a variety of gamemodes in TF2C. They represent a team's control over a particular area of the map. They are usually captured by standing in the capture area marked by hazard stripes. Information on what points are unlocked, or are owned by which team, can be found at the bottom of HUD, represented by team-colored squares.

How fast a point is captured depends on how many players are standing in the capture area - up to x3 speed if at least three players are on the point. The Scout and Civilian can capture points faster than regular classes - x2 and x5 speed respectively. Capture progress can be halted if a player from the owning team of the point is standing in the capture area. Capture progress will decay over time if there are no players on the point, again quicker if a player from the owing team is standing on the point.

For more details on how control points work in specific gamemodes, please visit the page for that gamemode from the list below.

As a primary objective

As a secondary objective