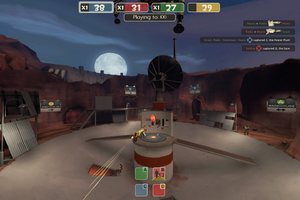 Typical round of Domination on Hydro.

Domination is a metaphor for all the territory disputes and land grabs that have underscored every armed conflict in the history of the world. Instead of Alexander conquering the Levant for Macedon, though, you're a thug conquering a 20-foot-wide metal circle for no one in particular.

This mode is designed around reaching a point limit that increases based on the number of control points you own. Control points may start neutral, or may start out owned by a particular team that will start gaining points from it as soon as the round begins. Depending on the map, some control points may increase your team's points at different rates. Contesting an enemy control point pauses their point gain for as long as you're on it.