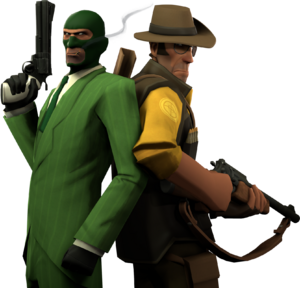 "Shoot at people whose army-navy-store cargo pants are a different color than yours" is a learned behavior by now, so we didn't think it would inconvenience you too much if we tracked down eighteen more color-coordinated psychopaths and put them on the payroll. Global Radio Network (GRN) and Yard Logistics Workers, Inc. (YLW) play a part in all the broadcast towers and freight yards you've been fighting over, respectively, but they've also got shady corporate interests that they're willing to hire mercenaries to protect. You're not so different after all!

Four-Team, also known as "4team", is a game mode introduced in the Death and Taxes update; as the name suggests the game mode features typical symmetrical gameplay, but players are now split between four teams instead of the usual two. These two new teams added are the GRN (Global Radio Network) team and the YLW (Yard Logistics Workers, Inc). Since teams will naturally be smaller in size, teamwork is encouraged and sticking together is advised.

So far, there are only two official maps that have four teams, Hydro and Flask; however two new maps featuring four teams have been teased in the 2.0.3 anniversary patch blog post.